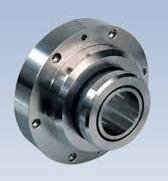 The seal body is sprung by either a metal or rubber bellows, a series of small springs, or by a single coil spring. The purpose of the springs is to hold the seal shut when the pump is stopped. In the case of the many less expensive seals the spring is also used to drive the rotating head of the seal.This fluid lubricates the seal faces and absorbs the heat generated from the associated friction, which crosses the seal faces as a liquid and vaporizes into the atmosphere. So, it's common practice to use a single mechanical seal if the pumped product poses little to no risk to the environment.

What is Single Mechanical Seal ?

The purpose of the spring is to keep the seal shut when the pump is stopped. When the pump is running the pressure in the seal chamber, being higher than the outside pressure, acts upon the seal surfaces to increase the closing force. Higher closing force means that any lubricating effect between the seal faces is marginalised leading to higher friction, more heat generation, and increased wear. Seal design can mitigate this increase in closing force. The design of a balanced seal incorporates surfaces to reduce the load imposed on the seal by the chamber pressure.

The seal body has to make an effective seal to the shaft. This is achieved in a number of ways. The single drive spring seal is a variant of the rubber bellows seal. The rubber bellows allows the seal head to flex and to become vulcanized to the shaft producing the shaft seal required. This arrangement is often found on small water pumps. It should not be used on abrasive water service as the abrasives will wear the bellows causing failure.

How to work the single Mechanical Seal?